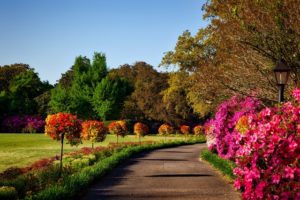 William wiped the sweat from his brow and squinted at the approaching stranger. Digging in the dirt had been hard and he had been at it all day, which is what he attributed this dark spectre to. As the stranger neared William could see that he had not imagined him at all. A man, distorted in dimensions appearing too tall and too thin, crossed the street in front of William’s house. A coat, long as a train and darker than night, enveloped the stranger, hiding his form. A hat, wide-brimmed and pointed like a witch’s, sat at a tilt, hiding his face. The midday sun must have tricked his eyes, for as the stranger approached William could see that he was neither as tall as he first appeared, nor as thin, nor as much of a “him” at all. The subtle cinching of cloth at the waist paired with the swish of hips as the stranger approached told him he had misread the stranger.

“Hullo, there.” William spoke with a certain caution, while trying to remain friendly, as the stranger came to rest, feet inches from William’s kneeling form. He gently drove the spade he had almost forgotten he was holding into the small pile of dirt next to the hole he had dug for the next azalea plant and began to rise to his feet.

“No need for formalities, my friend.” The stranger’s voice was dark and husky. William, had he not already decided that this was a woman, may have thought from the voice that the stranger was a boy in their mid-teens. “I have come to deliver a message.” He almost recognized the voice for a moment before the thought vanished into the thick syrup of mid-July air.

The stranger withdrew a small rectangle of paper from the chest of the coat, although William had not seen them undo the coat in any way. William accepted the offering and saw that it was a standard plain white envelope, like the kind used for greeting cards, with his name on it in a font too smooth to be hand written. When William looked up from the envelope he knew he had gone mad from the heat. The stranger had disappeared into nothing, leaving no trace of themsel—Wait. Nevermind. He could see them, now, walking briskly down the sidewalk. He decided he needed to get out of the heat, so he carried his gift into the house and sat himself in front of a small fan in his den where the sunlight did little to illuminate the room through the pinched and curtained windows.

William eased himself deep into the chair and slid his thumb beneath the corner of the envelope, prying slowly with his wrinkled, aged thumb, until he had freed the contents within. A letter, obviously handwritten in the same font as the name on the envelope, crinkled and breathed to life in his hand.

“My dearest friend, I believe I owe you an apology, though I fear it is too late to reach your ears. At many a turn I accused, indirectly though it may have been, that you were holding me back. I have come to understand that your reticence was your wisdom and your concern for, not yourself as I had once believed, but for me. It took a great deal of time and distance for this to become apparent, and I am saddened that this distance has grown as far as possible.”

The letter was signed in swoopy gibberish with a postscript beneath it.

“P.S. I have taken our favorite picture of Mom with me. I hope you will forgive me this last conceited act.”

William’s throat seemed to be too small to carry his breath, and his vision blurred. It had been so long. So needlessly, painfully long. He had worried, but he had not called. He had forgiven, though he had no longer remembered what had been forgiven. He had always meant to make amends. Time had just slipped away.

William rose from the chair, sweat still dripping from his forehead to his cheeks, his eyes stinging, and walked out into the murderous sun, letter clutched in his weak and wrinkled hand. He knelt to the ground and placed the letter at the base of his newest hole then slid an azalea bush, black dirt dripping from its roots, into place, pinning the crumpled paper to the ground. He scooped the few spade-fuls of dirt onto the roots, building up until the ground was even and the letter, he was certain, could not dig its way out. He started on another hole, pausing to wipe the sweat from his brow and caught a glimpse of something across the street. He lowered his head and focused on the job at hand. Those azaleas weren’t going to plant themselves.