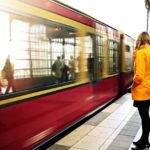 Anyway, the first time I saw him, three or four days ago, he was barely more than a shadow. A dark glitch, a double exposure of a woman passing on the sidewalk. For the briefest of moments, she was both a woman in a hideous pantsuit about to step into the crosswalk, and a man in clothes made of void undulating from the ground itself, and staring directly at me. I was only casually watching the sidewalk, having set my phone down for a few seconds to sip at my coffee. I have been wondering if I would have even seen him if my eye had not been drawn to the solid blue, utterly contrast-less pantsuit. If I had, instead, watched the shop owner burst from his door to chase down his Macguffin-forgetting customer, would I have missed the dark man?

I have been watching for him at every opportunity since that day. On the way to work, at the office, on lunch break, at the grocery store, everywhere I have gone has been an opportunity to stop and watch. He did not reappear. Maybe I wasn’t looking when it happened, maybe it just didn’t happen, I don’t know. Not even a hint of his appearance, until today.

Several days of vigilance had left me drained, I could feel what it was doing to me. I had to call in to work this morning, and I didn’t even have to fake sounding sick. Getting close to a week of no sleep was doing all the work for me on the phone. I had not tried the park, yet. So today I was going to go to the park to watch for the man, but first, I needed coffee.

I saw him when I went to the coffee shop. Only for a moment, barely longer than the last time, barely more than a shadow. Coffee isn’t helping me stay awake. He wasn’t across the street this time, or coming out of the ground, or hiding behind a pantsuit. I cut my finger on something on the table at the coffee shop. Something like a burr, but I couldn’t find it when I searched for it. It didn’t really cut me, more like it tore a gash in my finger. I tried dipping the finger in my coffee, but it just stung. I couldn’t tell if the stinging meant that it was working or not. He was sitting across from me, palms flat on the table top, crying. I don’t remember being able to see his eyes, or any detail about him, really, so I don’t know how I know he was crying. Maybe I was crying. How long has it been?

I saw him again in the elevator in my apartment building. He followed me inside, squeezing between me and the girl who lives down the hall from me. She didn’t seem to notice him, completely ignored it when he brushed against her chest. I wasn’t about to let him get away with that kind of behavior, but when I turned to castigate him, he was gone. I almost forgot he isn’t real, or only I can see him, I don’t know which. I think I scared the girl, though. She shrunk back from me, hiding her face for the entirety of the elevator ride. I wanted to console her, but all I could manage was to apologize in the dumbest mannerism I could muster, eyes down, voice distorted through the time and space of my waking existence, watery and voluminous in the cramped elevator. I don’t think it helped. Halfway up, I asked her what floor to stop at. I think I forgot she lived down the hall from me. I don’t know. She looked at me weird, but didn’t say anything, and the man was behind her, hands on her shoulders, looking at me disapprovingly. I started to make a startled face, but he was gone before it really got going, so I gave up.

The man was waiting for me when the elevator door opened. I wasn’t really scared, just confused, mostly. I wasn’t really scared until he ignored me when I walked out of the elevator. He seemed so much more solid, now. The girl got out after me and started walking to her door. She slowed and looked back at the man, or at me, I guess, probably. I don’t know if she could see him, yet. The man grinned then turned to follow her, leaving me dumbfounded, standing at the closing doors of the elevator. The man blinked out of existence again, halfway down the hallway, but I was still standing in place. I didn’t want to move, couldn’t move, had to watch her. She hesitated when she got to her door, looked back like she was being followed. I waved to assure her that she was safe, for now. I didn’t see the man at all. She didn’t look reassured. Her keys jangled, something solid, plastic or wood, I couldn’t tell, clunking against the door while she turned her key in the deadbolt. Whatever it was, it didn’t clunk against the door when she unlocked the knob.

When she opened the door, I saw a warm yellow glow inside her apartment. Like she had left the lights on. Or, maybe she lived with someone else, and they were home. That would be even better. She slipped through the door quickly, hugging herself up real close to the door, banging her elbow on the knob as she slid across its heavy wooden bulk. That’s when I saw him. He was in her apartment. Standing in the short hallway between her door and the living room. I tried to call out to her, to tell her it wasn’t safe, but the words caught in my throat. A strange squeal, a cough, and I knew I’d have to get her out of there. I ran to her door and tried the knob, but she had locked it already. I knocked, but there was no sound from inside. She could have already been… well… I don’t know what. Dead, maybe? The man looked threatening, but I guess I never thought about what threat he presented. I knew another way in, though, so that’s why I’m out on this ledge looking in the window at this girl. I’m not a bad guy, I just need to get in there to make sure she’s okay. Who knows what that man has done to her?