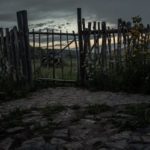 I awoke to a great storm raging just beyond the thin panes of window that gave shelter from the black abyss. It roiled and rumbled and split the sky, and in its wake I heard footsteps. Marching formations trailed the cannonade until a solitary soldier roamed. I almost felt, against the strength of my logic, that the soldier had come to perch upon my roof. I could see clearly in my mind’s eye that sullen warrior set his boots against the slicked wooden shingles of my small cottage.

A man came round today, I lay in bed, recalling his face. A dark and brooding visage met me at my door. A traveler, he claimed to be. Eyes black and sunken deep in his ash face, a glint barely escaping. His grimy black duster leaving him a silhouette against the diffused light of the iron sky. I feared him. Something in his stance, the gravel of his voice, the acridity of his scent. Something said danger. Something said the end.

Lighting strobed through the room, its audio detached by some seconds, now. Less battlefield, more great trees crumbling. A forest felled in an instant, a pop from the stove provided punctuation. Solid footfalls traced a path to the edge of the roof, and I could see, or imagine, at least, a pair of legs dangle near the top of the window. The dim light that escaped the stove my only source by which to see with my eyes. Between the brilliant blue of strikes I relied on my ears to see.

Another round of explosive light, its distance growing, and the rumbling mingled with a shuffle of weighted cloth. In a dying flash a figure blinked in and out of existence, so brief I knew I had only imagined it.

The man had begged quarter, to wait out the coming storm, to rest in his travel. I could not be moved. My small cottage could have sheltered him easily, but my fear would not be swayed. I lay in bed and wondered if this was guilt. Would I be sleeping peacefully if I had let him into my home? Would I be imagining this haunt if I were not alone? What is done is done, and I am left with the consequence.

The lantern by my bed was cold in my hand, the flesh sticking as I peeled my fingers from it. The match lit dull and minuscule, but I kept it alive enough to ignite the oil. A gentle crank and the flame grew strong. I swung my legs over the side of the bed, letting my heels thump the floor. My coat, a good, heavy coat, I draped across my shoulders, and drew a small log from the pile beside the stove. A thick, damp rag protected my hand, perhaps unnecessarily, while I pulled the stove open. A poker in one hand, I stoked the ashes before laying the raw, splintery log in the center of the stove. I could feel the hair of my arm curl and the skin tighten, but it was only for a second.

I crept to the window, lantern before my eyes like a fool. I tensed when I saw the face looking back at me, before realizing it was my face reflected from the glare of the lantern. I lowered the lantern, struggling to let my eyes adjust, and pressed my face to the window. The passing storm left wet and dark in its wake, so it was no surprise that I could see nothing else. I could no longer hear the storm, but it continued to flash, each bright explosion revealing different parts of the forest. I could not tell if the light wasn’t reaching the forest floor, or if there was no forest floor. Of course, there was a forest floor. There had to be. Just because it looked like a writhing mass of indistinct cephalopoidian nightmares did not mean it wasn’t there. I turned from the window, less comfortable than I had been, despite the renewed warmth from the stove.

I set myself at the small table I kept opposite the bed. My notes spread across the table, scribbled words and child-like drawings of fruits and vegetables framed a rough sketch of the man’s face. I must have messed it up, though I had held the image in my head clearly. His eyes were wrong, set too far apart, his mouth too small, head too large. I am no artist, to be sure, but to have so grossly missed the mark in constructing a human face was mildly shocking.

I turned the rough paper over, exposing the cleaner side of the paper. I tried to draw him again. The stick of charcoal dulled and sharpened on its own as I drew. My middle finger blackened from shading. I tried to picture the lines of his face, and the lines in his face, and after several minutes, I had it. The completed face exactly as I had remembered it, with its large, wide-set eyes. Its mouth too small and toothless. Skin smooth, with gentle bags beneath the coal-black, empty eyes.

Flashes of lightning began to grow more frequent, the roiling army returning with it. Rain pounded mercilessly against my poor little cottage. It was quickly cannonade and marching and forests crumbling. Forests dragging mountains behind them, stone and branch crashing to the earth. In the trailing march I could feel that lone soldier roaming, though he was no longer on my roof.

The lighting struck and the sky split and the cottage shook, and in its settling, I imagined a pounding on my door. I rose, almost an automatic response, and began to approach the door, before I felt the fear well up within my belly. Its cold fingers extended into my chest, constricting my lungs and gripping my heart. I could feel the presence on the other side of the door, feel its emotionless gaze piercing the thick wooden planks, driving straight into my mind. The pounding came before the lightning, further disrupting my solid logic. Lantern in one hand, poker in the other, I approached the door. Wheezing, straining against the oppressive heat of the cottage, I reached for the door latch.

My hand removed the latch, gripped the handle, and drew the door into the cottage. Brilliant light filled the sky casting the forest into oblivion, leaving only the small area of lighted ground in front of the cottage to remind that there was solid ground out there, somewhere. I could not tell you why, but for some reason, I did not see the man when I first opened the door. It took the better part of two seconds, two long, interminable seconds, to let my eyes adjust and recognize that the man was standing at my door. He extended a hand, silent, wordless, and I wanted to scream. I could not make myself decline the offer of his hand, and the light grew painfully bright. I could no longer see anything but white heat, my ears rang and my breath stopped. I don’t remember the touch of his hand, all I remember is the black soulless eyes and his small grimace. 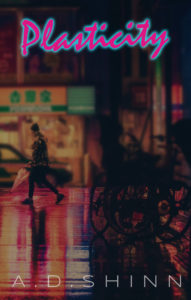